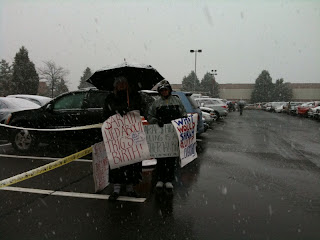 The estimates on numbers of people who showed up at BJ's Discount Warehouse in northern Virginia to get some face time with Sarah Palin Saturday vary. Some say as many as 500 showed up. Others put it closer to between 200 and 300.

A fairly small number of people - again, estimates vary - concerned about Palin's veracity, in the wake of her false announcement last Thursday that she had publicly disclosed a birth certificate for her youngest child, Trig, were kept off of BJ's Discount Warehouse property, caged into a "free speech zone." Nobody asked if the people there were armed.

At least more people showed up for Palin's book signing appearance in Virgina than attended the screening of Glenn Beck's farcical Christmas movie's unreeling in Boston Friday. 17 showed up for that. 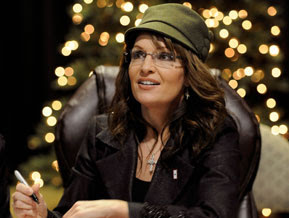 Here are some icy comments from that article:

She was dressed in faux Che Guevara garb today. Probably the creepiest she has ever been seen. Her followers don't do subtlety.

"I just want to thank her," one young woman with a group of recent James Madison University graduates said when asked what she would do when she met Palin face to face. "I just want to wish her well after all she's done for us [conservatives]

On behalf of the reality based opposition I would like to thank her as well. We could only be so fortunate to face her in 2012.

Can you get rich running for President? If yes, she'll do it. If no, she won't.

I was there at the protest. Lots of out of town license plates...Sarah is the Grateful Dead of the Teabag fringe. Many vans with "Warning unsocialized home schoolers on board" and other conservative pearls of wisdom.

Protesters were not allowed anywhere near Sarah...so free speech only applies to those who agree with her, you betcha!

Twittering was permitted, breaking a longstanding rule at the Gridiron forbidding tweets. Palin's nine-minute speech was too long to tweet, but extracts filtered out, feeding fans and detractors alike across the web and twittersphere.

Addressing the crowd of journalists, the former Alaska governor poked fun at the penchant of political reporters to leaf through campaign book indexes to find their names, noting that she decided to skip the index on her book.

But Palin also took the opportunity to take a few shots at her running mate from last year, and also her Democratic rival.

“The view is so much better inside the bus than under the bus," she said, neatly putting together a reference to her book tour and a crack at the former ticket mate, And if she ever need a bald campaign manager, "I'm left with James Carville," a reference to President Clinton’s 1992 campaign manager and a dig at Steve Schmidt, McCain's manager in 2008.

Staying with the book theme, she joked that “If the election had turned out differently, I could be the one overseeing the signing of bailout checks and Vice President Biden could be on the road selling his book, 'Going Rogaine.'”

As for the president, Palin joked that she was looking at a magazine cover of Obama and Chinese president Hu Jinato during an airplane flight. A nearby passenger stated, "Hu's the Communist," she related.

And, Palin said, "I thought he was asking a question."

Apparently, she didn't bring the kids up Saturday evening. Let's see how long she can resist the temptation. Undoubtedly, her handlers have somehow gotten it into Palin's mind that her Rusty Humphries statement on Trig's birth certificate was unfortunate at best.

images - Palingates & Bree Palin
Posted by Philip Munger at 12:01 AM