Sure He Lied. A Lot. But Did Romney Also Cheat in the First Debate? 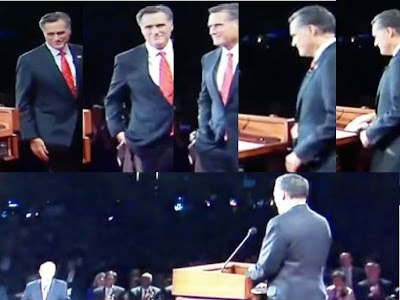 Above is a composite I made of Romney walking up to the podium in Wednesday night's first 2012 GOP-Democratic Party Presidential Debate.

Here is the slowed up video from which I made the series: There hasn't been a lot of traction on this yet, in spite of the plain evidence of him pulling out something that looks an awful lot like a small, 3x5-inch-ish note pad. The press will probably hold back on this like they did over W's infamous box-on-a-back in 2004: 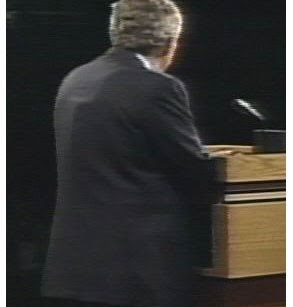 Meanwhile, here's a song about it:

The President was doing a lot of writing during the debate...were they allowed blank paper for notes? Was that to be ON the podium before they came onstage? If so, then I believe that Romnay did cheat. It would explain his repeated chant of "you took 716 billion out of Meidcare and used it to fund Obamacare" and his use of statistics that Obama had no answer for. I hope someone does pick up on this...we know he lies, why wouldn't he cheat too?

They were provided a blank pad and writing instrument on the podium.

Oboma had a very poor debate on his own.

He did not look like a man who should be the leader of the United States.

No way you can blame Romney for Obama's failure.

It is time to CHANGE leaders