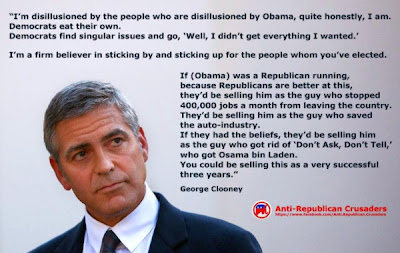 The above ad, by Anti-Republican Crusaders, featuring actor George Clooney, is aimed at progressives who feel betrayed by Obama's policies.  As in other pushes to draw people who had once supported Obama back into the fold, it is - to borrow the term Obama has been using on the stump this past week - Sketchy.

Has anyone yet caught Clooney openly and ardently defending the NDAA and its onerous indefinite detention provisions, that Obama is now defending to the hilt? 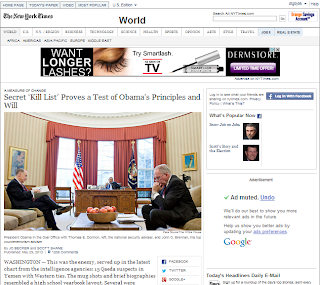 Or the position of his Justice Department that the banksters are unprosecutable?

Or his full-speed-ahead support of Shell Oil's Arctic offshore drilling?

Or his rubber stamping of Department of Energy policy regarding nuclear power in the post-Fukushima world?

Or his scuttling of the Copenhagen climate conference?

Or his intentional torture of Bradley Manning?

Or his unprecedented war on whistleblowers?

Of course they haven't

Clooney and his ilk cannot defend those policies, so he and the others avoid them or plead ignorance, like Congresswoman Wasserman Schultz.

They are wearing blinders.

So, yes, Romney is the worse of two evils.

Unfortunately, my spiritual beliefs preclude me from voting for war criminals, so nothing Clooney says will influence me.  Perhaps others.

And getting ready to vote for some Democrats.  Just not the war criminal one.

Posted by Philip Munger at 7:39 PM

Can't fault you an inch, Phil.

Only difference with me is I subscribe to the "Choose My Opponent" philosophy in the prez vote, and I certainly don't choose Rmoney.

I'm with you. Not throwing my vote away on a war criminal. Voting Jill Stein.

I'm disillusioned by people who can only criticize (plenty of things to criticize) but cannot acknowledge the positive things this president has accomplished. I'm all for taking this president to task for his foreign policy (his undying devotion to Israel, Afghanistan, the illegal drone strikes, etc.). What I'm not in favor of is not acknowledging that we're stuck in a two-party duopoly. One party is in favor of the ever-expanding surveillance state, continuing the feckless winnable "global war on terror", insisting that we keep our troops in Afghanistan until an arbitrary date in 2014 just because, having presidential kill lists, waging an unprecedented war on whistle blowers, indefinite detention, etc. The other party is all of the above plus, zero reproductive rights for women, ending (through privatization and "voucherization") of Medicare, privatizing of Social Security, ending Medicaid, ending (the unfairly maligned) Affordable Care Act (Obamacare), cutting/ending SNAP (supplemental nutritional assistance program or Food Stamps), going backwards on LGBT rights, etc. Yes, I'm also disgusted by this president however I'm not selfish enough to pretend that there isn't a difference between him and Romney. I care about poor people, I can see past my own privilege and I understand that if I was on the margin of society the differences between the two men would be much clearer. I'm not a big enough asshole to suddenly start acting holier than thou when my president commits war crimes that I directly benefit from (in lower gas prices, lower consumer good prices etc.). I can't stand this type of "hipster" analysis of the current state of American politics. I'm going to vote for Jill Stein (only because I live in a blue state) but if I was living in a swing state I'd certainly vote for Obama. Even Noam Chomsky agrees with that strategy, so go fuck yourself you selfish prick.

"so go fuck yourself you selfish prick."

--- way to win an argument or convince somebody to change their view.

I live in Alaska. My vote for Dr. Jill Stein will have zero chance of changing the outcome.

thanks for clearing that up. sheesh.....

No problem, you seem to be the kind of person that needs things spoon fed to them.

"so go fuck yourself you selfish prick."

--- way to win an argument or convince somebody to change their view.

Sometimes YOU do not use the most adult forms of communication.

And do you understand that no matter what you think of OBama, and whether your criticisms are legitimate or not THAT ROMNEY RYAN WOULD BE 20X WORSE ! ! !

Even if YOU think Obama is the lesser of two evils, ROMNEY/RYAN ARE BAD ENOUGH THAT IT IS TIME TO START CAMPAIGNING FOR OBAMA CUZ EVEN IF HE IS YOUR LESSER OF TWO EVILS, WE WILL ALL BE BETTER OF WITH OBAMA THAN WITH ROMNEY/RYAN AND ANY SPLIT VOTE WILL ONLY AID ROMNEY/RYAN.

ANYONE who votes for a third part and splits the vote---thereby diminishing OBama's chances ALSO GREATLY ENHANCES ROMNEY/RYAN AND THEIR VOTE ---IN ALL REALITY---THEREBY BECOMES A VOTE FOR ROMNEY RYAN !

Time to grow the fuck up and get off your high horse Phillip.

Obama cannot do everything in the first four years that you or I would like to see.

THINK ABOUT HOW YOU WOULD DO IT IF YOU HAD TO WIN AN ELECTION A SECOND TIME AND YOU WERE THE FIRST BLACK PERSON TO BE PRESIDENT.

And if your vote for Jill Stein will have zero chance of changing the outcome then why bother to vote. HOW defeatist is that ! You assume because Alaska has so much corruption and is a red state that our votes won't count?

KEEP BELIEVING THAT PHILLIP AND IT WILL ALWAYS BE TRUE, ESPECIALLY IF YOU CAN CONVINCE OTHERS TO THINK LIKE YOU DO.

Your idealism is built on childish view of placing people on pedestals and you never having to make the decisions your idols have to make so you can remain pure and idealistic while they get their pedestal pulled out from under them for being less than the god you want them to be.\

Grow the fuck up !

is the warranty on your caps lock still applicable? I hope so. Might save you some money, and printer ink.

"IT IS TIME TO START CAMPAIGNING FOR OBAMA"

--- as you can see, if you scroll back through the articles I've posted since the GOP convention, I am actively campaigning against Romney.

Why is that not enough?

Along with this EPIC RENEGE:
http://www.youtube.com/watch?v=fpAyan1fXCE
I didn't Get ANYTHING I want (and Even MORE I Didn't) from Zer0bama!

Neither candidate will change my life one way or another but I feel that Obama does have a special place in his heart for those Americans that are still looking for the Dream. I will cast my vote tomorrow for Obama.

Dobi-is that you Jesse. Wow Phil is the October surprise that all the "fucking retards" speak out.

Things are quiet in my neck of the woods, hows it lookin up yer way. AKjah.

Funny thing is Dobie is actually a lady who spends all of her time on the internet whining about being bullied, and doing most of her whining in CAPS.

Little hypocritical of her to come over here and bully Phil with her all caps tirade, doncha think? Glad I never bought into her sad tale of woe because she deserves not one iota of sympathy. Not after her behavior above.

Everyone grow the fuck up!

voted Green today. of course I live in a BLUE state, so like Phil, I can vote for whomever I want with no hangover the next day.