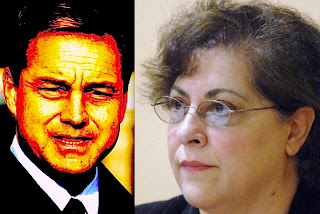 Back in 2008, Republican activist Andree McLeod complained about then Alaska Governor Sarah Palin's administration's use of private email accounts to conduct state business.  It has been a long and winding road.  McLeod has since been put down or faintly and wanly praised by many Alaska mainstream media reporters, and pretty much every MSM commentator who chose to not ignore her.  Even most of Alaska's so-called "progressive bloggers" have largely ignored her.

I'm not quite sure why that has been the case, as Andree's complaints have always been solidly based on her well researched perceptions that some public figure or another had clearly violated a state statute.

Today, her persistence on this issue paid off, as the Alaska Supreme Court ruled in her favor:


State employees can’t use private e-mail accounts to hide their work communication from public record laws. The State Supreme Court issued a decision on the matter on Friday, that largely affirms an earlier Superior Court Ruling. The case dates back to the Sarah Palin Administration and addresses the tricky question of whether the state records law is keeping up with communication technology.
Citizen activist, Andree McLeod originally sued the state in 2008, after she discovered Governor Palin was using a Yahoo account to conduct state business.

McLeod wanted the court to make it illegal for state employees to use private e-mail accounts for work. And said if they did, those e-mails should be preserved for the public record.

The Supreme Court agreed private e-mails regarding state business should be part of the public record. And McLeod’s Attorney, Donald Craig Mitchell calls the decision a victory.

“All in all, I think this is an important development for vindicating the public interest in Alaska during the new telecommunications, e-mail age,” Mitchell said.

But the court did not agree with McLeod that state employees should be barred from using private e-mail at all for their work. Mitchell says that’s unfortunate. But he says the point may not matter given that Governor Sean Parnell has ordered any state business conducted on private e-mails to be copied to the state e-mail system so it can be preserved.

Dave Jones is an Assistant Attorney General with the Department of Law. He says the state is pleased with the court’s decision, which he says can be boiled down this way:

“What really determines whether something is a public record is its content not the means through which it’s transmitted,” Jones said.

Who knows what implications this important judgement might have on the ongoing legal questions involving employees of the Parnell administration texting each other, and others, on state business via texting methods, or other electronic communication.  However, Assistant AG Jones' comment is not going to make the governor happy.

The Associated Press and Alaska Public Radio Network have covered this, but no Alaska bloggers have gotten to it.  The European blog which I've given honorary Alaskan status, Politicalgates, has, though:

It is not clear right at this moment what the immediate consequences of this decision could be. But in any case, this is clearly a major victory for Andree McLeod and a (late) slap in the face for the former Governor Sarah Palin, who believed that she is safe from public scrutiny with the extensive use of her elaborate network of private email addresses (mainly yahoo-addresses, at least three of them). The decision might also have legal consequences for similar cases in other US states.

Our congratulations to Andree McLeod! Her persistence, despite some previous disappointing setbacks, is hugely admirable. Her tireless and effective activism serves as a shining example for other citizen activists in the USA who might be faced with similar situations.

Big question being, do we get to see those emails. Anyway i have the most respect for Andree.

Will we get to see the emails?