Another Open Letter to Pat Dougherty 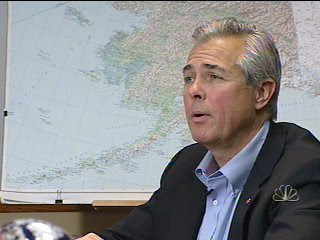 There's a picture off to the upper left of this page. The guy in it is named Bob Poe. He doesn't get any free advertising from the Anchorage Daily News.

I'd like to suggest, though, that beginning tomorrow, you incorporate the following new features about him, like the ones you carry for free for his likely 2010 opponent in the Alaska Gubernatorial race at the ADN. You could file it at a place called http://www.adn/bob-poe/ Here are my ideas, so far:

ps - or, you might consider doing something with Sarah's stuff that is less like some fucking shrine.

Oh, Phil... you out did yourself! This is your most clever post ever!

On a serious note, I liked Mr. Poe's response to the crisis in the villages that was posted in Mudflats. It could be campaign rhetoric, but it sounds good anyway.

Whether or not Poe is serious, Palin isn't.

There's only one growth industry in Alaska, as far as she is concerned - Sarah Palin.

The Palin Bots are hoping Poe is the D's nominee. Who the heck is he. Another nobody liberal.

Poe would have a very small chance, even with the help from the ADN's strong liberal bias.

But if the Fed's indite Sarah and try her a week before the election anything is possible.

That rightwing fishwrapper called the Daily Snooze and its shrine to Sarah Barracuda is a travesty.

Brilliant! Sir, I bow to you.

It truly is a shrine but they are probably getting more national readers stll it is nauseating. I also think Dougherty suck up to Palin. People access adn of being left biased? I don't see it. They are kissing her hiney in recent emails while she tries to manipulate them and shut them down from doing real investigatve journalism. Glad you sent this!

Mr. Dougherty - TEAR DOWN THIS SHRINE!

i just checked the ADN front page...the shrine has been pulled down...now, where do the locals go to slap it with their shoes???

The stuff is still there. They just removed the link from the front page of their electronic edition.

I wrote a piece on Pat's correspondence with me on this Thursday. He says they were thinking about taking it down already. Probably true.

If you click on my link to Bob Poe's page at the top of this article, you can still get to the Sarah Shrine if you really, really, really need to.....