Doug Fine's Too High to Fail 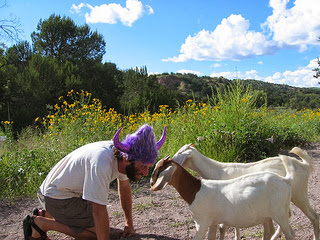 On Sunday, I'll be hosting author and journalist Doug Fine at the Firedoglake Book Salon, as he fields questions about the rapidly changing scene regarding cannabis legalization on the state level in the U.S.A.

Since publication last summer of the paperback edition of his look at organic, outdoor medicinal cannabis cultivation in California's Mendocino County, the political field on the legalization issue in various states is changing rapidly. Fine regards the passage of ballot initiatives calling for a legalization regime for recreational use in Washington state and Colorado as seminal. "It is no stretch to say that the Berlin Wall of the Drug War fell," wrote Fine in the augmented paperback edition.

I loved Too High to Fail: Cannabis and the New Green Economic Revolution so much, I soon read the author's two other books, Not Really an Alaskan Mountain Man and farewell, My Subaru:  An Epic Adventure in Local Living.

Because Fine's book is one of the most important yet published on failings and stupidities of the War on Drugs, he has been in demand for public speaking engagements on legalization issues and their ramifications.  He has taken a holistic approach toward how legalization, cultivation, marketing, product development and hemp-cannabis infrastructure might rationally work.  In that, he is in the forefront.

He recently returned from Europe, where he gave talks as part of his Drug Peace Tour.  Here he is, on November 13th, addressing the London, UK branch of NORML.  It is over 80 minutes long, but well worth watching:

image:  Doug Fine, at his Funky Butte Ranch, with two of his goats
Posted by Philip Munger at 11:57 PM