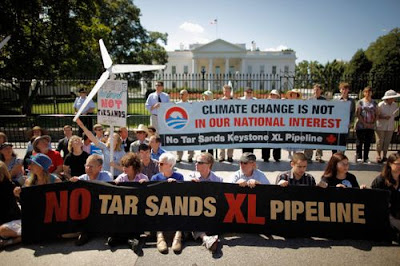 According to several sources, the Obama administration's State Department has given everything but a huge green light to construction of the final links of the Keystone XL pipeline, which will transport environmentally questionable Albert tar sands crude from the Canadian pits to Gulf of Mexico refineries, from which it will be shipped - in most cases - overseas.


The new impact statement says that extracting, shipping, refining and burning oil from the tar sands produces more climate-altering greenhouse gases than most conventional oil, but less than many of the project’s critics claim. The State Department study says that tar sands oil produces 5 percent to 19 percent more greenhouse gas emissions than other crude, depending on what oil was compared and who performed the calculations.

It predicts that Canada and its oil industry partners will probably continue to develop the oil sands even if the Keystone XL pipeline is not built. It states that building or not building the pipeline will have no significant impact on demand for heavy crude in the United States.

And it says that alternate means of transporting the oil – rail, truck, barge – also have significant environmental and economic impacts, including higher cost, noise, traffic, air pollution and the possibility of spills. It does not say that one method is better for the environment than the other, but says that a spill is more likely for rail transport but the volume of oil spilled from a pipeline probably would be greater.

Publication of the document next week starts a 45-day public comment period and then a protracted review before a final impact statement is issued, meaning a presidential decision on the project is still months away.


The blog firedoglake notes environmental activist Bill McKibbon, who is the pipeline's most visible opponent, tweeted:


I hope the State Dept is better at the rest of its work than it is at climate change.  No wonder Copenhagen was a botch; this EIS is silly

Other environment-oriented  groups are sure to follow in their criticism of the decision. Some have already voiced concern.

The Natural Resources Defense Council is "looking hard" at the draft document:


What we already know from existing analysis is that the Keystone XL tar sands pipeline is not in our national interest. The pipeline means worsening climate change. Piping it through the US heartland would put our ranchers and farmers at risk from difficult to clean up oil spills. And sending it to the Gulf Coast only makes our country a dirty oil gateway to overseas markets. This is a project where multi-national oil companies reap in the benefits while US communities take the risks.

The Sierra Club, which broke tradition by publicly exercising civil disobedience against the pipeline, leading to arrests of key members and club executives outside the White House last month, has issued a statement from Michael Brune, their executive director - one of those arrested:


"The Sierra Club is outraged by the State Department’s deeply flawed analysis today and what can only be interpreted as lip service to one of the greatest threats to our children’s future: climate disruption.

"We’re mystified as to how the State Department can acknowledge the negative effects of the Earth’s dirtiest oil on our climate, but at the same time claim that the proposed pipeline will ‘not likely result in significant adverse environmental effects.’ Whether this failure was willful or accidental, this report is nothing short of malpractice.

"President Obama said that he’s committed to fighting the climate crisis. If that is true, he should throw the State Department’s report away and reject the dirty and dangerous Keystone XL pipeline."

350.org, the group that has fought against Keystone longer and harder than any other, has yet to come out with a press release.  But Bill McKibben, the organization's founder, is posting a succession of faintly ironic tweets:


State Dept report includes a section on how to build a pipeline so it won't be...damaged by climate change.


Don't know why I get so worked up about climate change. It's not like it's the sequester or something.

Militant pipeline resistors, who have been arrested along the construction route by the hundreds, will no doubt step up their efforts.
Posted by Philip Munger at 1:59 PM

About 6 weeks ago I made the comment I would eat my hat if the decision was no.

And in the following weeks since have not lost a moment's sleep worrying about having gotten it wrong.

Well played, Amurkya of the Single Party of two branches, or wings if you prefer.
I knew I could count on Prez O.

Exactly, David. Color me "not surprised," too.

You never have been much good at reporting actual facts, ...and this doesn't show you're becoming any more honest about what you write.