Why Do Alaskans Remain Blasé About Increasing Evidence of Fukushima Contamination of the Oceans and Ocean Life? 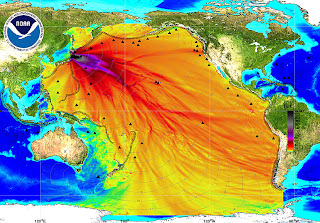 I was writing about the dangers many kinds of pollution pose to our oceans long before the March 2011 earthquakes in Japan led to the destruction of the Fukushima reactor complex and resultant and ongoing radiation disbursal.  Ocean acidification, oil development pollution, runoff from fertilizers, pesticides, herbicides and other chemicals, fecal pollution and strange new bacterias and other growths caused by global warming were already facing us before the reactor collapses.

The Alaska press - print, electronic print, audio and video - has mostly rubber-stamped government disseminated information.  The skimpiness of government information, and spottiness of North Pacific resting seems to have eluded concern by our media.  The most recent example here of lock-step writing on the subject came last week from Alexandra Gutierrez, writing for KUCB in Unalaska:


When the Fukushima nuclear power plant suffered a blowout a year ago, radioactive contamination of the Pacific Ocean was a major concern. People wanted to be sure that the marine ecosystem remained healthy and that the seafood they ate was safe.

To confirm that was the case, an international team of researchers took water samples as far as 400 miles out from the meltdown and tested them for radioactive isotopes. They published their research this month in the Proceedings of the National Academy of Sciences, and what they saw was mostly what they expected: Areas near Japan and in the line of strong currents experienced higher levels of radiation than usual, but the effect on marine life was minimal beyond Japan’s coast line.

"We’re not seeing the strange Godzillas or three-headed fish. The effects are going to be very subtle," says Ken Buesseler, a marine chemist at the Woods Hole Oceanographic Institution and the lead author of the study.

He adds that the Fukushima meltdown didn’t affect the health of most commercial fisheries, including stocks in Alaska waters, because the radioactive materials get so diluted.

"Fortunately, in some ways, this material in the ocean mixes quickly away and gets to lower concentrations. Certainly what we saw was many times – thousands of times – lower than what we might expect with regard to direct threats to marine biota or humans," says Buesseler.

While the water that the team sampled was safe enough to sustain marine life and even drink, researchers say there might still be some “hotspots” where radioactive isotopes have accumulated that could harm nearby marine life.

The research cruise was conducted in June of last year, and it lasted more than two weeks.

Gutierrez' article is based on information almost a year old:


The research cruise was conducted in June of last year, and it lasted more than two weeks.

A two-week investigation of a very small patch of ocean in the middle of last year.  Unfortunately, Gutierrez' incuriosity is emblematic of the Alaska press.  No article I've read, written in Alaska recently, mentions that reactors are still melting down, that massive amounts of water are being continually poured upon the nuclear time bombs there, and that the water is leaking out - into the soil, the water table and the ocean.

If this is happening in California, it is pretty certain something similar is occurring somewhere in Alaska.  Right now:

Posted by Philip Munger at 2:24 PM

Don’t get me started. Nuclear fission runs at 5000 degrees C or 9000 degrees F, while the human economy runs at 300 degrees C. Most of the heat gets dumped into the atmosphere. Fission and mankind were never meant to mix, and occupy two different planes. The two are only made compatible through heroic measures and large amounts of water, electricity, technology and risk reduction. And the technology is mostly past its due date.

What this chemist doesn't understand, since he's a chemist, is that after the isotopes get diluted, some of the heavy ones sink, and some of them get picked up by the phytoplankton, and then gets taken up by the primary consumers in the ocean food chain, which then get eaten by the secondary consumers, and so on, up the food chain. Over time, the isotopes accumulate at the higher trophic levels of the food chain, depending on the type of isotope, the species, and the type of tissue. Molluscs are generally hit worse than crustaceans or fish. Cesium gets taken up in muscle, strontium in bone, Iodine in the thyroid, etc. Alpha emitters such as Uranium and plutonium (byproducts of the MOX fuel from Reactor 3, see explosion below) are the real bad boys with half lives of 24,000 and millions of years. They’re heavy, so they sink, but when they are ingested (from the food chain), they are many times as damaging because of their effects on tissues.

Some gets excreted after tissues are saturated. But the long lasting isotopes stay in tissues for a long time, depending on a number of factors. The largest accumulation occurs at the top of the food chain (think walruses, seals, bears, and people). This process is called bioaccumulation and biomagnification. The process takes time, so isotopes will accumulate up the food chain over the years because of the presence of many long-lasting isotopes in the MOX.

The Kurohio current contributes to the Alaskan gyre, so eventually, some of the isotopes will circulate in the Gulf of Alaska. Where do the salmon go in the ocean, and how quickly will the isotopes enter the food chain for salmon and humans? How much of the tsunami debris is radioactive, how badly, and what do we do with it? (Hint—incinerating debris is a really bad idea, because incineration does not get rid of the radiation; it just spreads it around as an equal opportunity genetic/cancer nightmare.) What impact does ongoing Japanese incineration have on rainout in the Aleutian chain? What types of isotopes are being entrained into the food chain, and which are most prevalent in salmon? Because if we can’t eat the salmon, we don’t have a resource base to speak of up here in Alaska without relying on imported food.

These scientists need a little education about radiation if they are calling the all clear on this. With continued recriticality, the Fukushima NPPs will continue to emit deadly isotopes into the wind and ocean for the forseeable future, until the corium cools down. In addition to that, Japan’s mismanagement of the aftermath is spreading the isotopes, concentrating them in urban settings and dissipating them to the jet stream through incineration. And if the common and spent fuel pools start to burn, its time for plan B. Just because we can’t see it doesn’t mean it won’t harm us. I’m with you, Mr. Munger. I don’t understand the denial. It is time to start watching and measuring and objecting, not hiding our heads in the sand.

Got a geiger counter? And stay away from the Japanese imports and seafood, especially for the children and pregnant women, who are 10-100 times as vulnerable. Alaska needs a plan for dealing with bioaccumulation and tsunami debris.

One more link, a conservative view from the Congressional Research Service:

news reported a boater found a survey marker from Japan in a marina located in San Juan Islands last week. guess more debris to follow. thanks for your reporting

The map you published is not about radioactive contamination but tsunami wave.
http://nctr.pmel.noaa.gov/honshu20110311/

We are already manipulated to ignore the pollution, primarily ocean's pollution as people are rarely in contact with it. So the real challenge is to awake people about those concerns not misleading them with other manipulated data, but true information, clear thinking of the consequences of our technologies. Only freedom and democracy will save the world.

This is not a leak folks. This is dumping.