Palin Celebrates the Defeat of 2/3rds of Her Teahadists 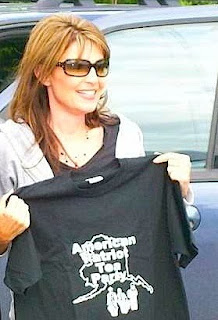 Two thirds of the Tea Party-affiliated candidates running in yesterday's election went down to defeat:

For all the talk of the Tea Party's strength - and there will certainly be a significant number of their candidates in Congress - just 32% of all Tea Party candidates who ran for Congress won and 61.4% lost this election. A few races remain too close to call.
In the Senate, 10 candidates backed by the Tea Party ran and at least five were successful. (Race in Alaska has not yet been called.)

In the House, 130 Tea Party-backed candidates ran, and just 40 so far have won.

Identifying Tea Party candidates is undoubtedly inexact. Our criteria, generally, was to include anyone who has either been backed by a Tea Party group or has identified themselves as a member of the Tea Party movement. Toward the end of this cycle, however, seemingly every Republican was trying to associate themselves this way. One left off the list was Dino Rossi, despite Jim DeMint endorsing him, since Tea Party groups backed Clint Didier in the primary.

Sarah Palin has a different view on the result:

You know as I watched this I kept wondering what happened to Carly Fiorina, Meg Whitman, Sharron Angle, Christine O'Donnell, and even fellow Alaskan Joe Miller? Why didn't they make the cut and also end up in this video? Because THEY disappointed their Queen that's why!

For them there is no "morning in America" because THEY are losers, and Palin does NOT want to be associated with losers.

If that doesn't just scream "qualified to be President" then by God I don't know what does!

Rachel Maddow also celebrates the election of so many new teahadists:


I've got one question regarding the list of tea party-backed candidates. Why isn't Don young listed as one of theirs? Here he is, as I photographed him, wearing his pistol, at Alaska's first Tea Party Rally, April 15th, 2009: 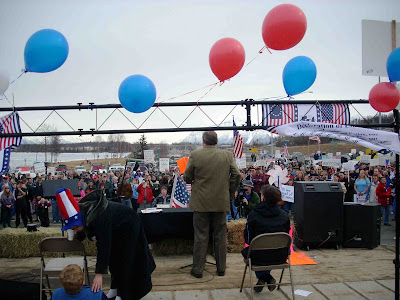 Posted by Philip Munger at 7:50 AM

Did Levi win the Wasilla mayoral race???? (figured the answer is NO. Can't find it on the net.)

What did that stupid bear video say to us?? Seriously, guys topping trees, people riding horses, and kids. WTF?

wow, shes in Lee Atwater Training camp: its the 'message' not the action(s).
Her PR are just spewing 'sounds' and meme's of the good ole days...so you dont think about wallst stealing your pension and home.
You know, the same wallst that funds her.

btw, guy riding horse?...was in MonumentValleyAz ON the Navajo Reservation. You know, one of those reservations in near abject poverty, but hey wave your tail feathers sweetie.

are there only three tea party members in alaska
like on the shirt?
toad, skary spice and joe?

Is that Sarah's real hair in that photo? If so, I can see why she wears a wig.

Only in Sarah Palin's world would losing the Senate for your party be considered a good thing. There are a lot of Republicans who don't think that is a good thing.

The long knives are coming out; get out the popcorn and let's all stay united.

Palin is delusional and out of touch with the reality that she's affiliated with a bunch of 'losers'. She thinks that by trying to recreate the reality of what she represents by a inane video, she will alter people's perception of her and the history of how she cost the GOP the Senate. Palin's star is falling fast. She and the Teahadists will soon be impotent and passe.

But maybe she can sell her Spanx girdles and Bumpits on the home shopping network to make a few bucks?

Shouldn't it be mourning in America?

I hear that the GOP circular firing squad has now put their crosshairs on the Quitter? I wouldn't be surprised.

Someone needs to remind Sarah that 'what goes around comes around' and often bites one on the derriere.

If the GOP has anything to say about it, her 5 minutes of fame were exhausted when she cost the GOP control of the Senate.

For this, Palin will never be forgiven.

Don Young was Tea Party before Tea Party was cool.

Don has always had a libertarian streak, Phil, you know that.

To call him a Teahadist though, I'm not sure I'd go that far.

His money still comes from Labor Unions, mining, timber and oil interests, I'd bet that very little if any came from Armey or TPE.

I didn't call Don a teahadist. I wondered why he wasn't on the list of tea party associated candidates.