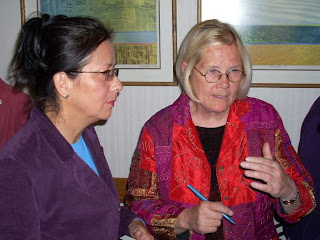 [Just over a year ago, retired U.S. Army Colonel, former high-ranking U.S. State Department official, author, lecturer and ardent advocate of peace, Ann Wright, was in Alaska for a set of speaking engagements. Here she is, at left, with Alaska's most courageous progressive, Diane Benson, after addressing the Anchorage Bartlett Democratic Club on May 14, 2009.

Today, Col. Wright is afloat with the Gaza Flotilla, in the eastern Mediterranean Sea. She wrote the following essay early Wednesday:]

Break the Israeli Siege of Gaza or Attack at Sea, Detention Camps & Deportation

Break the Israeli Siege of Gaza or Attack at Sea, Detention Camps and Deportation-

What will it be and What Will YOU Do About it?


By the time you read this, we will be on the high seas of the Mediterranean (we hope the seas will not be too high).

Four cargo ships from Ireland, Greece, Algeria and Turkey, will carry a total of 10,000 tons or 2 million pounds of construction materials for the housing of 50,000 made homeless during the 22 day Israeli attack on Gaza that killed 1440 Palestinians and wounded 5,000.

Many of us would like to see our boat renamed “The Audacity of Hope” as that is what we want to see from the Obama administration-- courage to challenge the Israeli government on the siege of Gaza. It would be a really brave, bold move as every U.S. presidential administration since the formation of the State of Israeli in 1948 has blindly given free-rein to Israel in whatever actions it wishes to undertake no matter if the actions are a violation of international law. The carte blanche given to Israel by the United States has been dangerous for Israel’s national security as well as for the national security of the United States.

In less than 48 hours, the Israeli Navy will probably fire U.S. made ammunition and rockets in international waters over the bows of two U.S. flagged boats and one Greek boat with U.S. citizens aboard as well as citizens from 13 other countries and over the bows of the Turkish 600 passenger ship.

Ironically, on one passenger ship will be Joe Meaders, a U.S. citizen who is a survivor of the Israeli air and naval attack on a United States Navy ship, the USS Liberty, in 1967 killed 34 U.S. sailors and wounded 173. The Israeli government has never acknowledged, much less apologized for, the deaths of these sailors, nor the destruction of the USS Liberty.

According to Israeli media (http://www.jpost.com/Israel/Article.aspx?id=176491), the Israeli military is preparing for our arrival off the shores of Gaza. The Israeli navy has been practicing its plan for preventing us from docking in Gaza, a plan that probably includes demanding by radio that the ships change course away from Gaza, firing weapons in front of the ships, ramming the ships and sending well-armed boarding parties onto the ships.

As our 8 ship flotilla prepares to depart Greece and Turkey to break the Israeli naval blockade of Gaza, the Israeli military is preparing a detention camp for the flotilla’s 700 delegates from 20 countries who are passengers on four of the ships.

Additionally, the military has identified a warehouse in the Ashelod area, just over Gaza’s northern border that will be used to detain the 700 passengers on the 8 ships.

Taking a page from the New York City police who put over 1500 persons into a filthy, unclean warehouse on a pier in New York City during the 2004 Republican convention, the Israeli government no doubt will make the surroundings as difficult as possible for us.

The Israeli government has extensive experience in warehousing dissent, as over 10,000 Palestinians are in Israeli jails and prisons, including juveniles who are arrested regularly in nighttime raids in villages of the West Bank.

20 passengers on the May, 2009 Free Gaza boat trying to break the siege were imprisoned for 10 days before they were deported from Israel. They included Nobel Peace Laureate Mairead Maguire and former U.S. Congresswoman Cynthia McKinney.

Wish us luck as we challenge the Israeli, Egyptian, European Union and United State’s unlawful siege and collective punishment of 1.5 million Palestinians in Gaza!

What will you do to help break the siege of Gaza?
Posted by Philip Munger at 10:48 PM

The Israelis should just let them through and then say nothing about it. Say nothing nada zilch. Let the media play it as they will and go from there.

Hey, Ms. Wright (I refuse to honor you with the title of Colonel)
Get stuffed!

Israel has prepared a makeshift detention center in its southern port of Ashdod, and officials have said the activists sailing on the ships face deportation or arrest.

Israel says that after a security check, it will transfer the cargo to Gaza through the United Nations.