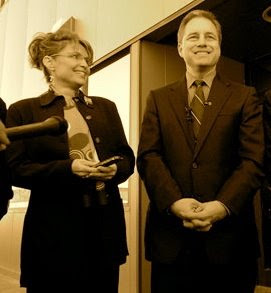 Winston Churchill once described Clement Atlee as "A modest man who has much to be modest about."

Along similar lines, on the last day of August 2008, the Anchorage Daily News described Alaska Lt. Gov. Sean Parnell as "the candidate who put the 'lack' in 'lackluster.'"

Progressive Alaska hasn't written much about Sean Parnell, because there hasn't been much to write about.

I was there, at the 2008 Alaska GOP Convention, the morning he announced his candidacy against Don Young. Young was elated at the announcement. But, dogged by a perception that Young might soon be indicted, Parnell came closer to beating Don Young than anyone ever has.

So he challenged Young in the 3008 GOP AK-AL primary.

And no sooner was he given a national stage in the post-resignation announcement world, than he attacked Alaska's senior senator (who also happens to be - unlike Young in 2008), Alaska's most popular politician:


The most distressing statement Parnell made in the FAUX News interview, was his repeat of this Palin lie:

Parnell goes on to express his disappointment in Sen. Murkowski's Friday remarks. Andrew Halcro wrote an excellent article about this, posted this morning:

Murkowski saying she was disappointed that the governor bailed out with no discernable reason and with sixteen months to go in her term doesn't represent a legitimate reason to be disappointed?

What's odd about Parnell's statement is that in defending Palin's decision to quit in response to the Murkowski release, he invoked the military and wounded soldiers.

Parnell told FOX News, "But I have to tell you, when she (Palin) went to Kosovo and visited our Guard members and the wounded soldiers there and in Germany, she saw that she doesn’t need a title to effect change and bring some hope to people who need it."

The undeniable irony of this is that Palin quitting represents the absolute, unmitigated antithesis of what Guard members and wounded soldiers sacrifice by joining the military to serve and defend the country. Soldiers don't have the luxury of saying, "I'm tired of people taking shots at me so I'm quitting half way through my tour of duty."

We'll see if he shows more spine once Palin is out the door, eh?

Here's another interview with Parnell, on CNN:

Parnell is a limp dick.

He will do NOTHING but be an imitation Palin.

Without Missy Palin's skirts to hide behind, his cowardice will become more and more evident.

Hi Phil - great posts - I'm picking this one to comment on.

I'm so burned that everyone is repeating the lies about the ethics complaints. No one has the numbers right nor (of course) the cost right. Cole did reduce Palin's personal amount back to 500K from the 600K increase.

This guy has 'gopher' written all over him. What a spineless fool. The poor slob's going to begin with even worse numbers than Palin's are right now.

Good job exposing him. On the national stage, he scored about a zero already.

Parnell certainly has the Palin talking points down perfectly. Maybe, once Sarah actually exits stage right, he will show some backbone. I can't picture him dealing with the big oil companies.

What is with all the hand gestures that Palin uses and now Parnell? Is it an Alaskan thing? Is it a way to keep their hands warm? I know that other speakers do this, but not nearly as much as these two. Wish I was an expert in reading body language.

Phil, I wonder if Sean has yet realized the mess that he will step into. From day one he will own the mess. Palin will not look back, or take responsibility for any of it. If he can come up with solutions or fixes, good for him, if not it is political suicide. He only has about a year and a half to help Alaska dig out of the mess.

I recall hearing his nickname as being "The Empty Suit". Poor Parnell has inherited the ex-beauty queen's lame duck-itude. Pity that. He will probably not be our next Governor either if he is just going to prove himself to be wholly owned by Palin, her own agenda and her ideology in abstensia. Rest assured he was picked to fulfill exactly this role. Giving Palin the option to control her puppet for the next year and a half without having to be accountable to all the ethical details she has been found by some, including yours truly, to be lacking in recently.

You wouldn't want to do your due diligence
now....

That would be too much work.


Palin said Monday she didn't view the cost as just the $300,000 for the personnel board -- but rather $2 million for the state. It is a figure her administration now uses -- not meant to be actual checks written by the state but to also reflect time of state employees.

It is a per-hour calculation that the Palin administration put together, involving time spent by state lawyers deciding which public information to release as a result of all public records requests, time spent by governor's office staffers responding to media inquiries about ethics complaints, and time technicians spend on retrieving requested e-mail, among other things.

Re: the latest Anonymous' criticism re: due diligence, read ADN commenter WatchingU's rebuttal:

Liar liar pants on fire. The ethics complaints are dealt with by the personnel board who are not paid except per diem, they don’t have regular meetings and don’t work a normal schedule,l they have outside jobs, the lawyers hired to investigate are not state employees, and their fees are outlined in the personnel board costs, her lawyer is not a state employee, does not use state time and since the constant statement is that these are frivolous complaints they should not need excessive investigation to be so quickly dismissed as the Governor often brags.

Record requests and email requests have charges associated with them. It is not done for free, and the charges are outrageous. The time associated with doing these things is more than adequately compensated for by the fee’s charged.

Biggest Whopper from Last Week - What a Way to Start, Sean!