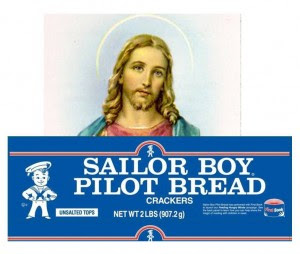 One: Passing out the Pilot Bread loaves in a fishy way.

Aspects of Alaska Governor Sarah Palin's inability or unwillingness to separate church and state were covered this past week by three Alaska progressive blogs. This constricting inability covers Palin's approach to more than one subject. Shannyn Moore at Just a Girl From Homer, put it succinctly:

During Alaska’s State of the State speech in January of this year, Governor Palin said,

“As public servants, will we draw from a servant’s heart the resolve to put pettiness and power struggles aside and work together for the good of the people? We have the choice.”

Wow. She sounded great! What a relief! She didn’t get too cranky coming back here after her failed Vice-Presidential bid. She proclaimed she was ready to work with everyone; that it was a choice whether to work for the good of the people or wallow in pettiness! Yea!

She’s fabulous when she’s reading a teleprompter looking like a Mary Kay advertisement collided with the “hair bump” infomercial. Line up recent events with the “I talk pretty” speech and you find hypocrisy plaque has clogged the oxygen supply to her “servant’s heart.” If by “we” she meant “me”, the answer is “no.”

The most obvious recent breach of this important tenet of American politics was Palin's February trip - along with her man-on-a-short-leash , LTG Sean Parnell - with Franklin Graham, to Marshall and Russian Mission, on the lower Yukon River. AKMuckraker at The Mudflats printed a copy of the message delivered jointly by Samaritan's Purse and the State of Alaska:

We wish to extend our heartfelt greetings to you and hope this package provides you with much needed food as well as the thought that many Alaskans are thinking of your village during this difficult time. We appreciate all the efforts of Franklin Graham and Samaritan’s Purse, as well as the many volunteers, churches, synagogues and non-profits who have come together to provide supplies to your community.

The State of Alaska has many services available through the Division of Public Assistance. We have provided contact information for the different programs. If you have additional questions, feel free to contact the Public Assistance offices at 1-800-478-4372 or http://www.hss.state.ak.us/dpa/ .

Extending God’s Grace
in a time of need,

Your need has not gone
unnoticed by Him or by us.
As you look to Him, may He continue
to bless you and meet your needs.

Philippians 4:19
And my God will supply all your needs according to
His riches in glory of Christ Jesus

As AKMuckraker wrote, "Praise the Lord and Pass the Pilot Bread."

To bestow its charity, the fundamentalist Christian organization brought in its celebrity evangelist, Franklin Graham, along with Gov. Palin, Lt. Gov. Sean Parnell and the Rev. Jerry Prevo, head of the Anchorage Baptist Temple, to create a media event of altruism. The showmanship of the relief flight to Russian Mission and Marshall maximized the social capital of Samaritan's Purse and provided a platform for the faith-based partnership between Franklin Graham and Gov. Palin. The alliance of Graham and Gov. Palin began during her vice presidential bid and will likely continue as Samaritan's Purse ramps up its Alaska operation, buying large tracts on the Kenai Peninsula as an apparent base for further missionary and political lobbying efforts for "Sarah 2012." The publicity also made the people in need feel small.

[By the way, I don't remember seeing Rev. Prevo in any pictures of the "relief" mission. Did he not go, or does his presence simply not come out on some kinds of photographed images?]

Moore concentrated on criticizing the prima Donna and selfish aspects of Palin's rejection of Juneau Democrats' recommendation of state Rep. Beth Kerttula to replace Sen. Kim Elton in his seat, as Elton takes an important job with the Department of the Interior.

Palin, within days, insulted Elton, insulted Kerttula, insulted Juneau Democrats, and probably created a messy working situation over the course of the rest of the 2009 legislative session. The Juneau Democrats will reject Palin's counter-proposal, resubmit Kerttula's name, the Governor will again reject it - and so on.

The combination of growing awareness of Palin's hypocrisy in the realm of "bipartisanship," her inability to distinguish between the religious and secular, incapability to separate the personal from the public, and cynical use of family when she thinks it helps her while lashing out at people who bring up her family in inconvenient ways, is quite unprecedented in recent American politics. But the biggest set of nails about to slam her political future shut have to do with the strange ways she continues to deal with a gas line she claims to have built, that will never be built on her terms.

Her recent actions are like the opposite of the images one might imagine the Beatitudes from the Sermon on the Mount represent.

Alaska Republicans continue to reject most aspects of Palin's AGIA pradigm. The Transcanada proposal, which Progressive Alaska (and others) predicted last year wouldn't be able to get financing, is looking fishier every week. "Denali," (which only Diane Benson addressed seriously in 2008) is looking less fishy every week. Perhaps it will eventually get going past its current level of mostly well-financed propaganda.

A pair of state representatives introduced a resolution calling on Gov. Sarah Palin to re-evaluate the natural gas pipeline license that the state awarded to TransCanada last year.

It’s pretty questionable whether their fellow lawmakers will agree to this -- especially so late in the session -- but it should generate some debate. The sponsors are Fairbanks Republican Rep. Jay Ramras and Anchorage Republican Rep. Craig Johnson.

And I received this yesterday (not yet available online):

Bestselling author of Going to Extremes, a nonfiction account of his year in Alaska, returns to the state in search of the $40 billion natural gas pipeline that Sarah Palin has said she is building. But McGinniss finds that not only is the pipeline not being built, but Palin herself is the biggest obstacle in its path. (“Pipe Dreams” p. 50).

“Everything she is doing is the opposite of ‘Drill, baby, drill,’ ” former governor of Alaska Tony Knowles tells McGinniss. Despite pressure from the Obama administration to get pipeline construction underway, the prospect of its ever being built looks dimmer by the day.

McGinniss reports how Palin has virtually ignored the pipeline issue since returning to Alaska in November to focus instead on her 2012 presidential campaign strategy.

McGinniss notes her absence from major oil-company summits, and hears from a rising chorus of critics, including some of her former supporters. Alaska Republican Mike Hawker tells McGinniss, “The only thing standing in the way of an Alaska gas pipeline is the Sarah Palin administration.”

Palin's biggest blunder? Locking the state into an exclusive contract with a Canadian pipeline company (TransCanada) that has no access to Alaska's natural gas. Now BP and ConocoPhillips--two companies that do have gas--have launched a rival project.

McGinniss writes that despite her repeated claims that she'd already gotten the project underway, “What Palin had done… was contrive to pay as much as $500 million to a foreign company to look into the possibility of someday building a line.”

Since the election, the price of oil and gas has continued to plummet and Alaska's budget deficit has soared. McGinniss argues that Palin's $500 million commitment to TransCanada looks increasingly like money wasted. Even Hal Kvisle, the CEO of TransCanada, concedes, “I don’t know whether we’re going to see this [pipeline] get built or not.”

Three: Cowdery, Masek and the perception that Alaska politics is as corrupt as it ever has been.

Former Alaska Representative and current muckraker/reformer Ray Metcalfe and I discussed possible ramifications of the earliest bribes Masek has acknowledged. As Ray told me, "we're entering the grey area between regular and possible RICO-related prosecutions."

C-SPAN is preparing two programs on Alaska political corruption. A year ago, no such production would have been complete without Governor Palin being trotted out as a reformer and corruption fighter. Now, with a failing gas pipeline idea, having to repay over ten thousand dollars in illegally taken money (how much did Masek plead to?) to the Alaska treasury (with more sure to come!), unanswered questions about the status of hundreds of thousands of dollars in clothing, and so on, she will not be featured.

More and more, Palin is being seen, in terms of Alaskan political corruption, as more of the same.

Democratic Party candidate for Alaska governor, Bob Poe, will be featured at the Mat-Su Democrats' Egan Dinner on March 27th, at 6:00 p.m. at the Canyon Grill in Wasilla. More on that later in the month.

By far, the most comprehensive coverage of last week's Anchorage Mayoral candidate forum at the Hispanic Affairs Council of Alaska, is at the new progressive political blog, Think Alaska. Their coverage is in two parts.


There was a lot covered by Alaska bloggers this past week! I wish there was time to recount more of it here this week!

...and yet here in Haines, there are people planning on the economic boom that is going to happen when the port of Haines is used to ship supplies north to the gas line.

Great post Phil! Ouch! You might be getting a call any min. from Bill M.!
About GINO's reputation....!

"Inability to separate church and state"...you mean like Obama's faith-based initiative office with the Pentecostal preacher?